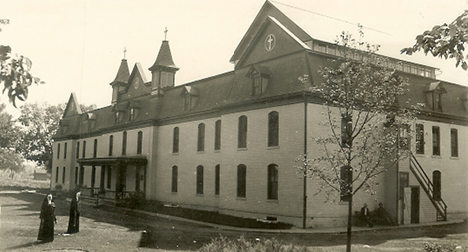 Pictured above is the original St. Mary's Home. It was a three-story structure that was begun in 1887 and finished in 1888. It housed the Felician Sisters, elderly women and men, orphaned boys as well as chapel and an infirmary for the Sisters. Sister Mary Veronica was the first administrator of St. Mary's. Rev. Zdislaus Luczycki was a Polish-born priest who came to Manitowoc, rented the first home to house the aged and orphans of the area, and asked the Felician Sisters to help him with his work. On August 27, 1887, three Felician Sisters arrived in Manitowoc including Sister Mary Veronica. 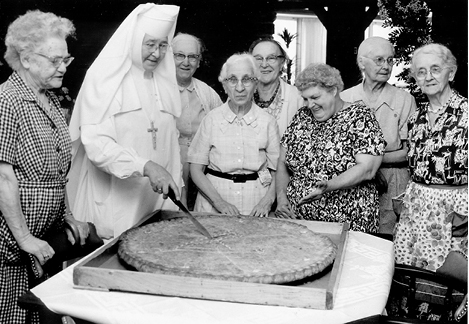 Sr. Nathaniel, Administrator of St. Mary's Home from 1961 to 1968, cuts a huge homemade pie to the delight of the residents. 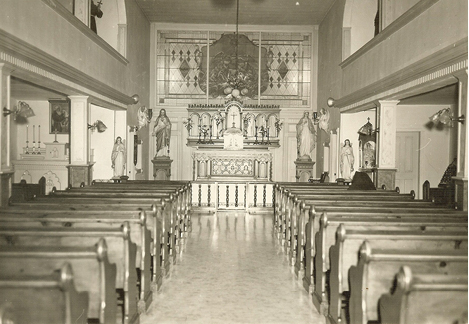 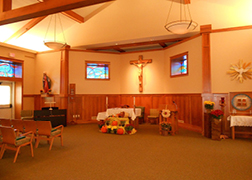 Pictured above is a black and white photo that shows the sanctuary of the original chapel in St. Mary's 1888 building while the color photo shows the chapel as it exists today in the Village Square which was built in 2009. The open spaces on the right side are for those using wheelchairs and scooters. 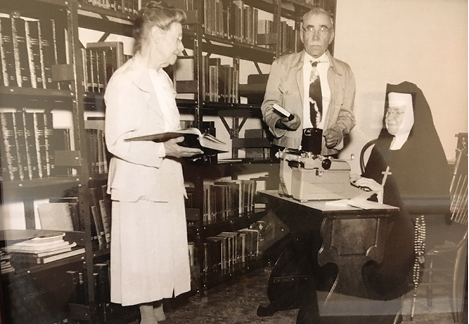 On October 9, 1951, it was the opening day of the St. Mary's Library. Mr. Joseph Brzczowski had the distinction of being the first person to withdraw books. In a photo from that date is Ellen Bourdout, Joseph Brzczowski and St. Assumpta, the first librarian. 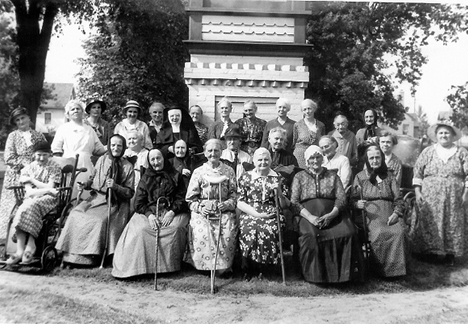 In the summer of 1939, women residents at St. Mary's Home gathered in front of the shrine which stood on the north end of the campus. Sr. Mary Elekta stands in the left center of the photo. She lived at St. Mary's from 1910 through 1946 and served as the administrator from 1922-1933. 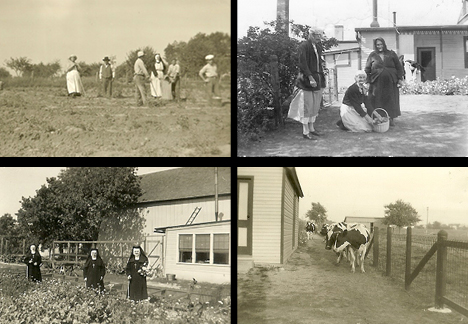 These photos from the 1930's show how the Felician Sisters used the 20 plus acres around St. Mary's Home for planting crops, such as potatoes, beans, peas and corn. St. Mary's was located near the outskirts of the south side of the city limits in the 1930's. The orphans and aged residents worked alongside the sisters to plant and harvest the various vegetables. There was also a large barn that housed milking cows, horses, pigs and chickens. 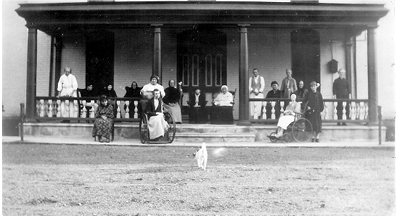 This photo circa 1920 shows the "inmates" as they were referred to at this time, on the porch of St. Mary's Home. In this era, St. Mary's was commonly known as the "poorhouse on Polish Hill." In the late 1920's electricity, a sewer system and a boiler were installed in the building with help from area business men. 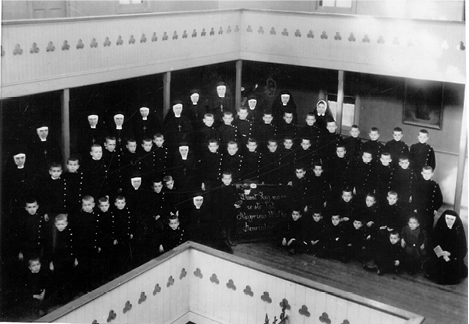 Pictured above is a 1888 of St. Mary's Home with orphan boys and Sisters (circa 1890). In its early years, St. Mary's Home not only cared for seniors but also the crippled and orphaned. The official name of the facility at this time was The Sacred Hearts of Jesus and Mary Home for the Aged, Crippled and Orphans. The orphanage continued as part of St. Mary's from 1887 through 1934 when both church and state authorities advised against maintaining a residence for both the aged and youngsters in the same building. During its 47 years of existence, a total of 633 boys received care.